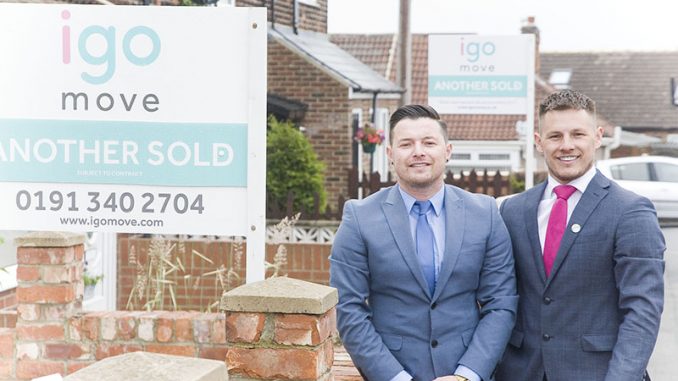 A growing Teesside-based estate agent is looking to expand by inviting applications to lead property sales in other areas of the region.

Hartlepool-based Igomove was launched two-and-a-half years ago in Hartlepool and has already appointed directors to successfully concentrate on County Durham and Teesside.

Now the hybrid estate agency is looking to build on its rapid progress in those areas by placing more focus on Middlesbrough, Darlington and Stockton.

There is also a plan to target Sunderland as part of Igomove’s next phase before the end of the year.

Managing director Mark Flint said: “We are looking to grow the business even more after a successful first couple of years.

“While we have sold houses in these areas, we are looking to cover Middlesbrough, Darlington, Stockton and Sunderland with greater intent.

“We are looking for interested people with a minimum of three years’ experience to become partners and lead their own area at Igo Move. There is no up-front cost and those successful will effectively be running their own branch.

“It’s an exciting opportunity and a further sign Igomove has big plans – our model works.”

Igomove was launched in January 2019 with the aim to bring a more personal service to the client for a “fair fixed price”.

Mark, 42, created the company having operated within the industry buying and selling properties for more than 20 years.

He said: “The next logical step was to open an estate agent because that is my passion. It has evolved from there. Given the set-back with coronavirus, which did hold the industry back initially, we are on target for where we want to be. That is fantastic.”

Igomove now has 12 members of staff, including directors, negotiators and admin staff. It has brought almost 350 houses to market this year alone and has just passed the 370 mark for sales in 2021.

Brothers Michael and Danny Naylor (above) were brought in as directors to lead the County Durham and Teesside arms of the business, respectively speaking.

Michael, 30, has progressed from a junior sales negotiator to valuer at another estate agent and it is almost two years since he decided to switch and front his own area with Igomove.

He said: “It’s grown to be bigger than I ever believed in this short period of time. I knew that Mark was doing something different to the way estate agents operated. It’s exciting and the model we have here works.”

Danny, 25, concentrates his efforts on the Stockton, Billingham, Wynyard, Norton and Ingleby Barwick areas having moved to Igomove just over a year ago. He started as an apprentice in 2014 and worked his way up to manage another estate agent branch.

He said: “Mark knew what was missing. It worked well. The sky is the limit with Igomove. A lot of things I experienced weren’t being done right, so when I heard about the model here it was fresh, moving with the times.

“It was also more affordable than everyone else, or most, on the market, and the price we charge works with the model we have.”

* For further information about the opportunities at Igomove contact mark@igomove.co.uk